Residents of a Western Australian neighbourhood are turning the trend for Facebook crime-watch pages to their advantage by making them ultra-local.

Eight months ago, Karen Turner was moderating a community crime Facebook page with more than 4000 followers in her home suburb of Carey Park in Bunbury in the south west of the state.

Ms Turner noticed an increase in crime in her suburb and put the call out for locals to come together to address the issue.

It prompted a town hall meeting where about 100 people turned up.

"We just had crime out of control and everybody was hiding away in their homes instead of coming out," Ms Turner said.

The meeting inspired Ms Turner to create a series of "micro" neighbourhood watch pages, made up of members who live on individual streets.

I started up separate groups for different parts of the suburb — there are roughly 100 streets in Carey Park and we now have 45 pages operating," Ms Turner said.

Social media crime-watch pages can have thousands of followers and are a popular way for the public to share crime or suspicious activity with their neighbours by posting something they've seen or heard.

But police are not fans.

Racial and offensive comments posted on some of the biggest crime watch pages have — at times of heightened community division — spilled out of cyberspace and onto the streets.

National President of Neighbourhood Watch Bernie Durkin said the days of getting to know your neighbour in person were "probably gone".

"We seem to have moved away from traditional Neighbourhood Watch volunteers and very much moved to an online support though Facebook and apps," he said.

My concern coming from a policing background is that people can post anything on Facebook. Is it verified? We don't know.

"It is an emerging issue, because someone has reported it on Facebook they think the police know about it and they'll do something about it." 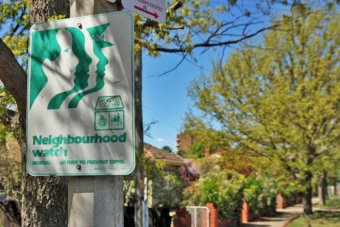 PHOTO: National President of Neighbourhood Watch Bernie Durkin believes the days of getting to know your neighbour in person are probably gone. (ABC Local: Anthony Pancia)

Dr Hughes believes the pages are here to stay and will increase, but he has concerns about the misinformation they can report and the subsequent harm that can cause in the community.

"When you're on those pages we can build a frenzy into fairly minor matters," Dr Hughes said.

"In one particular incident in Perth we know of, this frenzy was built up on a Facebook page and nobody actually made a report to Police about what was happening.  'It got to crisis level when it was never really a crisis."

Ms Turner said her community's social media project was working because it informed residents of suspicious behaviour and brought the suburb's residents closer together.

"We wanted the residents to get to know each other, and it worked. People are starting to know who their neighbours are," Ms Turner said.